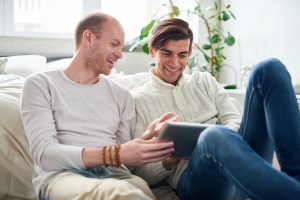 In the infamous case of Baby M in 1985, a traditional surrogate (not a gestational surrogate) answered an intended parent couple’s newspaper ad, delivered the couple’s baby, and then changed her mind, deciding she wanted to keep the child and forgo compensation.

Surrogacy law has come a long way since. Knowledge about infertility, LGBT couples who want to have children, and how gestational carrying works has become more widespread, and surrogacy is now legal or permitted in 47 states.

Since there remains no federal law on the books, each U.S. state has its own surrogacy policy.

Surrogacy-friendly states actually vary widely in their individual policies on gestational carrying. Some states’ laws specifically permit surrogacy in some or all cases, some unofficially allow the practice despite having no laws on the books, and a few explicitly ban it altogether.

States also differ on whether they require a pre-birth order, which requires doctors to write the intended parents’ names on the child’s birth certificate, or a post-birth order, which is a less-secure option that legally validates parenthood after delivery.

While in 2015 the U.S. Supreme Court legalized same-sex marriage in a landmark ruling resulting from years of raised awareness, gestational surrogacy for LGBT couples still isn’t expressly legal in a few states, such as New York.

With the Uniform Parentage Act, which took effect in 2019, Washington state also reversed its ban on commercial surrogacy.

Oklahoma’s State Senate recently passed a bill that legalizes surrogacy contracts but adds a new approach: requiring “pre-conception” court orders, meaning a judge must approve an intended parent’s validation order before an embryo is transferred to the surrogate’s uterus, not just before a child is delivered.

In New York, one of just three states to still prohibit surrogacy contracts, a bill to legalize surrogacy remains in the balance, with progressives still debating its merits despite the state Senate passing the bill and Governor Andrew Cuomo’s vow to sign it.

The New York bill didn’t make it to the House floor before the end of the legislative session, keeping the state in the surrogacy-unfriendly minority and serving as a reminder that while most of the United States has made progress on surrogacy in the decades since Baby M, there remains work to be done.

If you have questions about surrogacy law or want to discuss a legal aspect of your surrogacy journey, get in touch with Fertility Source Companies today for a referral to a reproductive attorney that can better help you understand the laws in your state or country.